Loud Commercials - Where can we turn?

I am frustrated on a daily basis with the lack of our government's responsiveness to the millions of physical assualt that are perpetrated upon us by loud commercial broadcasts over the television... broadcasts where the volume of the commercial is significantly louder than that of the programming.

The FCC, in true bureaucratic form has this to say:

Loud Commercials. The FCC does not regulate the volume of broadcast programming, including commercials. Surveys and technical studies reveal that the perceived loudness of particular broadcast matter is a subjective judgment that varies with each viewer and listener and is influenced by many factors, such as the material’s content and style and the voice and tone of the person speaking. The FCC has found no evidence that stations deliberately raise audio and modulation levels to emphasize commercial messages.


Manually controlling the set’s volume level or using the “mute” button with a remote control constitutes the simplest approach to reducing volume levels deemed to be excessive. Many television receivers are equipped with circuits that are designed to stabilize the loudness between programs and commercials. These functions usually must be activated through the receiver’s “set up/audio” menu. Should these techniques fail to resolve the problem, you may consider addressing any complaint about broadcast volume levels to the licensee of the station involved. Additional information about loud commercials can be found at http://www.fcc.gov/cgb/consumerfacts/backgroundnoise.html.

Have there been any criminal assualt charges placed against the tv stations for bombarding us with those unwanted sound waves?  Maybe there should be.  Somehow there has to be some relief!
Posted by Larry at 1:41 PM No comments: Links to this post 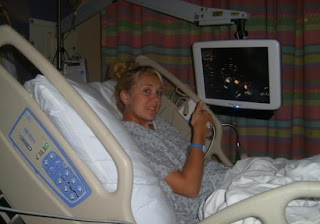 Just MENTION “Emily’s Fight” and
25% of your bill will be donated!!!
DINE-IN or CARRY OUT

Thank you to Rudy’s Pizza
http://www.rudyspizzaitalian.com
Rudy’s Pizza is also making a personal donation to this fundraising effort!!!
Posted by Larry at 11:40 AM No comments: Links to this post